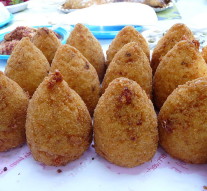 No Comments on Arancini – a taste of Sicily

Arancini, or arancine in Sicilian, are stuffed rice balls which are coated with breadcrumbs and fried. They are said to have originated in Sicily in the 10th century during Kalbid rule.

Arancini are usually filled with ragù (meat sauce), tomato sauce, mozzarella, and/or peas. There are a number of local variants that differ in fillings and shape. The name derives from their shape and color, which is reminiscent of an orange (the Italian word for orange is arancia, and arancina means “little orange”), although in eastern Sicily, arancini have a more conical shape.

The arancini are considered a typical dish of the city of Messina, where they usually have a conic form.

Very strange to see the bare ground where once the