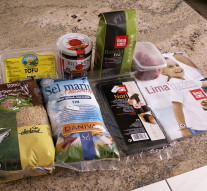 No Comments on Macrobiotic diets – tell me more please?

thanks to Wikipedia here is some info for any chefs interested in macrobiotic diets and what it entails..

A macrobiotic diet (or macrobiotics), is a dietary regimen which involves eating grains as a staple food, supplemented with other foods such as local vegetables, and avoiding the use of highly processed or refined foods and most animal products.

One goal of modern macrobiotics is to become sensitive to the actual effects of foods on health and well-being, rather than to follow dietary rules and regulations. Dietary guidelines, however, help in developing sensitivity and an intuitive sense for what sustains health and well-being

Some Japanese macrobiotic theorists, including George Ohsawa, stress the fact that yin and yang are relative qualities that can only be determined in a comparison. All food is considered to have both properties, with one dominating. Foods with yang qualities are considered compact, dense, heavy, hot, whereas those with yin qualities are considered expansive, light, cold, and diffuse.[8] However, these terms are relative; “yangness” or “yinness” is only discussed in relation to other foods.[9]

Brown rice and other whole grains such as barley, millet, oats, quinoa, spelt, rye, and teff are considered by macrobiotics to be the foods in which yin and yang are closest to being in balance. Therefore, lists of macrobiotic foods that determine a food as yin or yang generally compare them to whole grains.[10]

Nightshade vegetables, including tomatoes, peppers, potatoes, eggplant; also spinach, beets and avocados are not recommended or used sparingly in macrobiotic cooking, as they are considered extremely yin.[11] Some macrobiotic practitioners also discourage the use of nightshades because of the alkaloidsolanine, thought to affect calcium balance.[12] Some proponents of a macrobiotic diet believe that nightshade vegetables can cause inflammation in the body and osteoporosis.[13] Some general guidelines for the Japanese style macrobiotic diet are the following (it is also said that a macrobiotic diet varies greatly, depending on geographical and life circumstances):[14]

Fish and seafood, seeds and nuts, seed and nut butters, seasonings, sweeteners, fruits, and beverages may be enjoyed occasionally, 2–3 times per week. Other naturally raised animal products may be included if needed during dietary transition or according to individual needs.

A macrobiotic diet includes many of the same foods as vegetarian diets, but in macrobiotics some types of fish and other animal foods are included according to individual needs and it is recommended to avoid milk and dairy products. The two dietary styles share enough similarities that a vegetarian and even vegan version of macrobiotics is not uncommon.

Taken from article at http://en.wikipedia.org/wiki/Macrobiotic_diet

mid October and a gorgeous sunny day and 20 degree